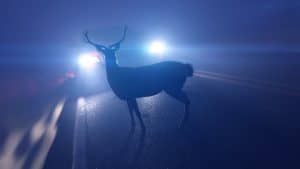 We’re officially into Autumn and, according to State Farm Insurance, they and other insurance companies will be seeing more claims coming in involving car versus deer collisions. Historically, these numbers will continue to increase over the coming weeks and months.

State Farm recently released their annual deer-vehicle collision report on their website. The data for this study was gathered between July 1, 2017 and June 30, 2018. The results show that West Virginia leads the country in car and deer accidents for the 12th year in a row. Tennessee is ranked number 30.

The most dangerous months for deer and car collisions are October, November, and December. Even though November is the top month, collision numbers are actually down from last year’s statistics. This is interesting in light of the fact that there are currently approximately four million more licensed drivers on the roads.

Here are a few other facts from the report:

Keeping yourself and others safe during deer season

In their report, State Farm offers advice and tips to keep yourself, your passengers, and other drivers less at risk for accidents with deer and other animals:

The car accident lawyers at Wagner & Wagner want you to be safe this fall and winter. Sometimes it can’t be avoided when an animal runs in front of your car, but we want you to be as informed as possible. When you are injured in an accident due to someone’s carelessness behind the wheel, we can help. Talk to our legal team today. We serve clients in Chattanooga and Cleveland, TN, in North Georgia, and all surrounding counties. Call us today at 423-756-7923 or complete our contact form to schedule your free consultation.