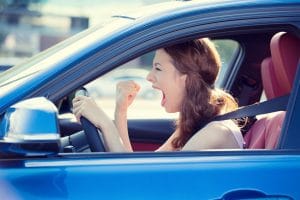 According to the AAA Foundation for Traffic Safety, almost 80% of drivers admitted to some form of road rage or anger while driving during a year. Surprisingly, nearly eight million drivers acknowledged that they engaged in dangerous conduct, including getting out of their car to confront another driver or even ramming another driver.

Jurek Grabowski, Director of Research for the AAA Foundation for Traffic Safety, said that “Far too many drivers are losing themselves in the heat of the moment and lashing out in ways that could turn deadly.”

Examples of angry behavior that drivers acknowledged include:

The AAA Foundation offers these following tips to help reduce the possibility of road rage:

The AAA foundation based their findings on a national survey of 2,705 drivers taken in 2016. The drivers were 16 years of age and older.

At Wagner & Wagner Attorneys at Law, we handle every type of vehicle accident. Our Chattanooga car accident lawyers hold negligent drivers and irresponsible drivers responsible for wrongful deaths and personal injuries. We demand full compensation for pain and suffering, lost wages, and all medical expenses. In road rage cases, we are likely to file a claim for punitive damages if a mad driver caused you harm.

For help with all car and vehicle accidents, call us at 423-756-7923 or fill out our contact form to schedule an appointment. We represent drivers, passengers, and pedestrians in Chattanooga and Cleveland, TN, and in North Georgia.