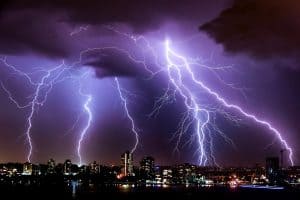 If you are like most people, you think of lightning strikes as rare occurrences – but they’re not. According to National Geographic, “The average American has about a 1 in 5,000 chance of being struck by lightning during a lifetime,” and about 10% of all people who were struck will die from the resulting injuries. Even if you are not struck directly, you can still be seriously injured “when the current jumps, as well as through conduction and ground current.”

A lightning strike, therefore, is a potential hazard for people who work outdoors. By law, your employer is responsible for ensuring that you now about the potential hazards of your work place, and training you to deal with those hazards. This is why the Occupational Safety and Health Administration (OSHA) has cited C.W. Hendrix Farms for failure to protect their workers from a lightning strike that killed a worker at their Parkland farm. The company faces the maximum penalty for this citation, which is $12,934. The local OSHA inspector, Director Condell Estmond said, “This tragedy could have been prevented if the employer had trained management and employees on the hazards of working in severe weather.”

Claiming compensation for an “Act of God” injury

When an employee is injured in the course of performing his or her regular work duties, he or she may be able to file a workers’ compensation claim – even if the injury was caused by a natural disaster. This is because workers’ comp is a no-fault system, which means you can make a claim no matter who caused the injury.

In Tennessee, workers’ compensation covers your medical expenses and gives you a partial wage replacement benefit for lost time at work. It also covers vocational rehabilitation, compensation for permanent disabilities, and a death benefit for those workers who die in workplace accidents.

Occupations where lightning strikes are a workplace hazard

Per OSHA’s fact sheet on lightning safety, each year “in the United States, cloud-to-ground lightning occurs 20 to 25 million times and over 300 people are struck by lightning. During the past 30 years, about 50 people, on average, have been killed by lightning strikes every year, and many more suffer permanent disabilities.” Employers must take precautions to protect workers and recognize lightning as the workplace hazard that it is. Workers who are required to work outdoors in open spaces can be exposed to lightning risks. OSHA lists the following as occupations with a higher risk of injury from lightning strikes:

Lightning is unpredictable. It can strike miles from the nearest rainstorm. Workers who get struck by lightning typically get caught outside during a storm, or they go back outside too quickly after they believe the storm has passed by. Before starting an outdoor project when a storm is coming, check the weather report. If you are working outside when a lightning storm approaches, go into a building and seek shelter. If there is not a building close by, seek shelter inside a vehicle with the windows rolled up. Remain indoors or in the vehicle until 30 minutes have passed since the last peal of thunder.

The injury lawyers of Wagner & Wagner Attorneys at Law have been fighting for the community since 1945. We represent injured workers in Chattanooga, Cleveland, and throughout Tennessee, and in North Georgia. You may schedule an appointment by calling us at 423-756-7923 or by filling out our contact form.