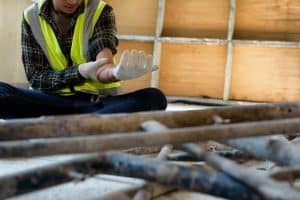 By now, it is likely that the collapse of Champlain Towers South condominiums in Surfside, Florida is familiar to most people. It is a story that shook the nation when we heard—and maybe even saw—the collapse of the 12-story building that was occupied with hundreds of residents at the time, and it was tragic how 98 people died that day.

To some, it was confusing how such a large building could essentially cave in at random. But after research and reports, it looks like it was due to years of damage and neglect along with some poor workmanship and overall design flaws. It was a true recipe for disaster just waiting to happen.

However, while it is a little more rare for occupied buildings to give out, it is not so rare when compared to how often structures that are currently being built collapse. Structural collapses injure and even kill hundreds and hundreds of workers every year.

In fact, the Bureau of Labor Statistics reported that workers in construction and extraction occupations make up about half of all fatal workplace injuries at 47.4%. That’s 976 deaths that occurred at work in 2020 alone. While regular inspections can prevent a lot of these tragedies from happening, serious work-related injuries can still occur.

What kind of injuries can be sustained in a structural collapse?

Injuries can range from super minor, like cuts and bruises, to life-threatening, like damage to the airways, when a worker becomes a victim of a structural collapse. Here are some of the most common injuries that can happen:

What kinds of structural collapses are there?

Despite how simple a building falling down can seem, the act of it actually falling down is anything but. There are actually five common types of structural collapse patterns which are listed below:

Why do buildings collapse at construction sites?

Buildings can collapse for many reasons, but the Hazard Mitigation Plan of New Orleans claims that they are often the result of a prior incident, like a natural disaster. Sometimes something like a hurricane or a tornado can severely damage a structure without it being realized. However, here are some other reasons why buildings could collapse:

Filing a workers’ compensation claim in Chattanooga after a structural collapse

When a construction worker gets hurt during a structural collapse and is lucky enough to survive, they will be unable to work. If they get hospitalized to treat those injuries, the medical bills can quickly pile up on top of it all. The impacts and trauma of a structural collapse will last for years for the person hurt as well as their family; and it can be even more devastating if a life-changing disability comes out of it.

It is important that they find someone who can help fight for them. However, it is important to know that workers’ compensation in Tennessee is based on a remedy system which requires you to file a claim exclusively through workers’ compensation and not directly against your employer. It is still possible to file a personal injury lawsuit against a third party if they were proved to be at fault. Third parties in this case could be contractors, subcontractors, manufacturers of tools, materials, or safety equipment, architects, or engineers.

If you or someone you know was injured in a structural collapse accident at work, then it is your right to seek out compensation for your pain and suffering. We understand the stress you and your family are going through, and we will work diligently to ensure that you have restitution and justice. Do not hesitate to call our Chattanooga lawyers today for help. To schedule a free consultation, call Wagner & Wagner Attorneys at Law today at 423-756-7923, or complete our contact form. We serve injured workers in Chattanooga and Cleveland, TN, and throughout North Georgia.