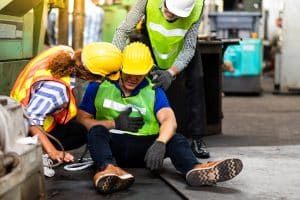 With the job market being as competitive as it is nowadays, the younger generation often feels the need to accept the first position offered to them without considering how potentially dangerous the work can be or without having any prior job experience. Sometimes the idea of the job or working with friends can be so fun and exciting that potential dangers are overlooked. These can be detrimental factors when considering how often younger workers get hurt while on the job.

In a 2019 study, the Centers for Disease Control & Prevention (CDC) reported that there were over 19.6 million workers under the age of 24. That accounts for about 12% of the total people working in the United States—and they are getting hurt significantly more often than their older counterparts. In 2018, the emergency department treated work-related injuries in people between the ages of fifteen and nineteen 2.2 times more often than workers over the age of 25. Coupled with the fact that people of any age are more likely to get into an accident within their first month on the job, these young workers are particularly vulnerable.

Why are younger workers getting hurt more?

According to the Young Workers Project, roughly 48% of workers between the ages of 15 and 17 work in leisure and hospitality, which includes the food service industry. Working in retail is the second most popular industry for them to be in. With little-to-no prior experience, working in a place that requires precise skill like a restaurant can easily lead to an injury. Think of the slippery floors, sharp knives, hot stovetops, and heavy boxes that come with the job.

Plus, teenagers and younger workers in general are more likely to not take their required safety training courses all too seriously. The Young Workers Project also reports that 38% of teens who went to the emergency room for a workplace-related injury were those working in the food service industry at the time. It is likely because of their lack of skills and failure to take safety seriously that younger workers are getting hurt more often.

Because teenagers and young adults are still developing both physically and mentally, they are more likely to injure themselves while on the job. And an accident could completely alter their future. For example, the owners of a local supermarket in Tennessee instructed two 16-year-old employees to clean a meat grinder. When one worker reached his arm inside to clean it, the grinder turned on and quickly amputated his forearm. Child labor laws strictly prohibit minors under the age of 18 from operating or cleaning heavy equipment, like a meat grinder, for reasons like this. Now, that 16-year-old boy will have to live the rest of his life with a disability.

Young workers can also suffer traumatic brain injuries if they fall, or if they’re hit with a falling object.. The National Library of Medicine conducted a study which found that a history of traumatic brain injuries/concussions is associated with a lower academic performance as well as more physical injuries. So if a teenager suffers a concussion while working, they immediately become more likely to not do as well in school, which already puts them behind their peers in their future success and careers. And since they are more likely to obtain more physical injuries as well, this could put them on the fast-track towards a more difficult adulthood.

Young workers’ injuries can be anywhere from minor cuts and bruises to something way more fatal. In fact, the CDC found that there were 409 deaths related to workplace injuries in workers under the age of 24—34 of those being under the age 18. The CDC shared a story of a 17-year-old boy who was making a pizza delivery to a home located less than one mile away from the restaurant. A severe rainstorm was going on during his delivery and he ended up losing control of his car and crashing into a tree. He was not wearing a seatbelt at the time of the crash and ended up losing his life due to internal bleeding. This is just one teenager’s story that ended in tragedy because they did not take safety seriously and likely thought they were invincible. Unfortunately, he is not the only one.

How to prevent future workplace injuries in Chattanooga

When it comes to preventing further injuries and fatalities in young workers, more emphasis needs to be put on safety training since teenagers can often feel as though they are essentially bulletproof. They think it would never be them; it would be someone else who gets into a car accident, someone else who obtains a serious injury, or someone else who gets rushed to the emergency room. When employers share more stories about real people who got really hurt, it could help get through to these young workers what dangers there are when working. The extra effort can be so helpful and protect the younger generation from an injury, disability, or even death.

If you or someone you know was injured in an accident at work, then it is your right to seek out compensation for your pain and suffering. We understand the stress you and your family are going through, and we will work diligently to ensure that you have restitution and justice. Do not hesitate to call our Chattanooga lawyers today for help. To schedule a free consultation, call Wagner & Wagner Attorneys at Law today at 423-756-7923 or complete our contact form. We serve injured clients in Chattanooga and Cleveland, TN, and throughout North Georgia.