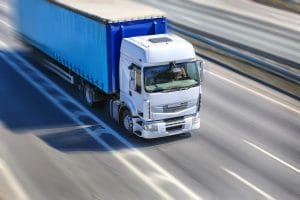 The aim of the truck lane restrictions is generally to separate trucks from cars and other vehicles to reduce traffic congestion. There are several considerations:

According to the Washington State Department of Transportation (WADOT), only a few major roads in the US have truck-only lanes – such as I-5 in California and I-75 in Georgia. Part of the reason why there aren’t many truck-only lanes is that it costs a lot of money to add new traffic lanes. WADOT states that separate truck lanes should be considered where there are high volumes of trucks that cause road congestion such as:

State departments of transportation usually conduct feasibility studies that balance the dangers of truck accidents and congestion with the cost of new roads and roadway signs.

Restricting trucks to certain lanes can be done throughout the year or can be limited to certain times of the day – such as peak-hours. According to the Texas A&M University, restricting the lanes trucks can travel in should “only be considered where there is a minimum of 4 percent trucks in the traffic stream over a 24-hour period and when approximately 10 percent of the total truck traffic is using the lane to be restricted.” The length of the roadway restriction should be at least six miles.

In Tennessee, drivers of all types of vehicles (trucks, cars, and other vehicles) are required to drive in the right lane if they drive below the normal traffic speed, except for passing or turning left. Truck drivers must comply with highway signs that limit certain types of trucks (like semis) to specific lanes of travel except when passing.

Truck accidents often cause death or severe injuries because of their size, weight, and dimensions. At Wagner & Wagner Attorneys at Law, our truck accident lawyers examine police reports, work with investigators, conduct extensive written and oral discovery of witnesses, and fight to show you’re your injuries or the death of a loved one were caused by negligent truck drivers. We demand compensation for your economic and non-economic losses (including your pain and suffering). Call us at 423-756-7923 or use our contact form to schedule an appointment. We fight for injured drivers, passengers, and pedestrians, in Chattanooga or Cleveland, TN, or in North Georgia and the neighboring locations.