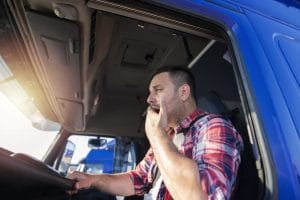 Truck drivers often work very long hours. Many times, the trucking companies that hire truck drivers pressure drivers to make deliveries based on unreasonable or changing schedules, which in turns affects the truckers sleep schedules. A fatigued driver is a dangerous driver.

What is sleep apnea?

Sleep apnea is a disorder that affects a person’s breathing. Sleep apnea causes “brief interruptions of breathing during sleep.” The interruptions can occur up to 400 times nightly and can last up to 10 seconds. If the condition isn’t treated, death can result.

There’s an increased risk of sleep apnea if you:

Sleep apnea is usually diagnosed at a sleep center where professionals monitor your sleep.

The Federal Motor Carrier Safety Administration does require that commercial truck drivers be medically qualified to drive. A diagnosis of sleep apnea may mean a driver is not considered medically qualified to drive unless they get adequate treatment for this disorder. Generally, mild sleep apnea doesn’t disqualify a driver. Moderate to severe apnea that interferes with the ability to drive safely is a disqualifying medical condition.

Motor carriers who employ truck drivers can’t “require or permit a driver to operate a CMV if the driver has a condition — including sleep apnea — that would affect his or her ability to safely operate the vehicle.”

Tired drivers are dangerous drivers. Drivers who operate a truck who are too tired or have a medical disorder such as sleep apnea which makes fatigue likely should be held accountable if they cause a truck crash. At Wagner & Wanger Attorneys at Law, our Chattanooga injury lawyers have been fighting for truck accident victims since 1945. We demand irresponsible drivers be held liable for your pain and suffering, medical bills, and the full amount of wages state law permits. Tired drivers should also be liable for any damage to your vehicle.

If you’ve been injured in a truck accident, call us at 423-756-7923 or complete our contact form to speak with an experienced truck accident lawyer. We represent injured truck drivers in Chattanooga and Cleveland, TN, in North Georgia and neighboring locations.